A schematic of how the layout of the desired motel.

Motel is cluttered with trash, lots of desaturated colors and lots of greens. Red will follow Chase throughout the hotel. It will be lit with a soft overhead for absence and light use hard light to direct the audiences eyes to subjects and separate the subjects from their backgrounds. The hard light will be motivated with the lights at the mirror (clf’s with a slight flicker to them), bathroom (cfl’s with a slight flicker to them), lamps (cfls) and helicopter search light. Here is a frame that is similar to the desired color palette and how the space will be lit and also serves as an example of why white walls should be avoid for the motel room.

For cinematography the ideal location will:

Color palette should be blue (blue is to the wife like purple is to Marie in breaking bad) with a complimentary color of purple. The scene will be mainly backlight (motivated by the windows) with low fill. The light will be a warm color temperature. An example of the room will be lit, but not designed is here:

Another example of the look that is far better then what I achieved in the above stills:

The desk will be somewhere in the bedroom. AS OF WHERE WE, IT IS CURRENTLY UNDECIDED.
The desk should be very monochromatic, covered with only shades of grays and blacks, EXCEPT for the BLUE letter. The lighting will be harder then the rest of the bedroom stuff, motivated by a DESK LAMP. Otherwise, the rest of the will be the same as the bedroom.

Location photo’s can be found: here.

Below is a very pastel and ugly representation of the color palette that will be used in the film: 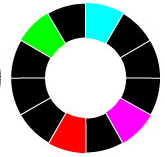 The green and red will be used for Chase and the motel. The green is the primary color that will be used in the motel scene while the red is a symbol for Chase refusing reason and following his passion. Red will follow chase through the film examples include (red lights in the motel casting the color haze on chases face, the backpack begin red and the mirror in the motel having a red cast [might be lipstick or blood] exactly where Chase’s reflection is).
Blue is the wife’s color, which symbolizes reason. Blue is the wife’s favoriate color and not only will she be wearing it, but the bedroom will also be covered in it. The letter that falls out of CHASE’S backpack will also be blue (and should be written in yellow pen)*Need to test.Purple doesn’t much meaning to the scene other then give the scene more color variety in the scene to avoid having the only color in the room blue.

The Symbols of Color

Here is a list of colors that represent the stages of life according to  Storaro, which fit in without of events in the script.

Zip ties for hand cuffs and something to gag him.

Only square. Lots and lots of squares. However, at the end of the film, after Chase has read the note circles will begin to appear. When he is reading the note, have the red clf globes in the shot and make them out of focus bokeh. Have a circle on the door that chase opens. And a circle in the bathroom that is only scene when Chase unties the man.

There should be an X in the bathroom with the man who is tied up.

There should be no squares at all on this set. All the set dressing should be circles. There can be several clocks because Sara’s time is limited (check with Mike)

Example of circles in the set dressing can included, circular mirrors, clocks, circular pictures and frames and decorative plates.